The Club started in 1953, formed by members of Adelaide Archery Club. The first location was in a disused brick quarry (owned by J Hallett & Sons) behind the former Colebrook Home on Shepherds Hill Road, Eden Hills.

In 1958, the Club moved to the Tourist Bureau Reserve, known locally as "Dingley Dell" (now the Shepherds Hill Recreation Park) and was positioned near where the Marion Riding Club exists today.

In 1964, Eden moved to its present location. The first Club building was erected in March,1965 and comprised a secondhand, prefabricated (and small - 46' x 12') dwelling purchased from the SA Housing Trust, for 75 pounds ($150).

That building served the Club well, until the current brick building was commenced in 1986. The old building was dismantled and relocated to Polish Hill (near Clare) and it continues to serve as a very fine dormitory building!

In 2017, the verandah deck was modified and enlarged to better accommodate the increase in the Club's membership.

In 2018, we started a program to replace the Stramit butts with layered foam, which obviously is much "kinder" to arrow shafts. The butts have now all been updated and layered foam is here to stay!

New footbridges were installed in 2018, 2019 & 2020 to facilitate safer creek crossings and provide a longer-term legacy.

Eden Field Archers is located 10 km south of the Adelaide CBD, in the foothills of the Mount Lofty Ranges over 4 hectares of the Shepherds Hill Recreation Park from the DEW (Department of Environment & Water).

The gate is usually locked - it is a requirement of the National Parks that we keep it closed. On shooting days, from about an hour prior to published shooting times, there will be members arriving during these times who can unlock the gate for visitors.

Follow Viaduct Track for about 750 metres to our Clubrooms and car park. If you are driving, please respect walkers and cyclists. The speed limit within the Park is 25 kmh, at all times. 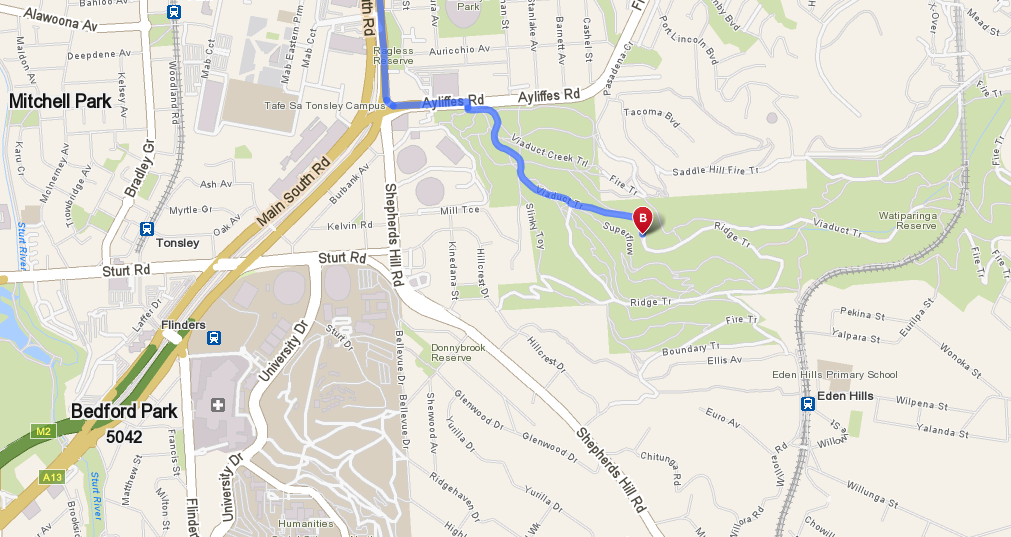 Please note: if travelling by car from South Road or Shepherds Hill Road, you will need to perform a U-Turn using the turnout provided halfway up Ayliffes Road, in order to access the car park entrance. (Current map directions do not indicate this.)